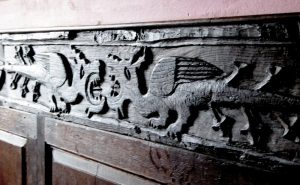 Growth during the 1300’s and 1400’s
Our town’s connections with the Princes of Gwynedd are an important part of our history.  In fact, one of the oldest items you will see as you explore the church is an effigy of a lady who is thought to have lived in Maesmynan Hall in the 13th century.  Legend has it that she was the wife of Prince Dafydd ap Gruffydd – brother of Llywelyn the Last.
Caerwys grew during the 14th century, and building on the church site continued. During the 14th century the south nave was added on to the tower, and then the chancel was added.
There was considerable disruption and lawlessness during the revolt of Owain Glyndwr at the beginning of the 14th Century, and several local towns were burnt. There is no direct evidence that this happened to Caerwys, although in 1406  a group of English burgesses from Rhuddlan complained that it had.
Whatever the uncertainty, during that period the north nave was added, so that the capacity of the church doubled.

The Church in the Middle Ages 1300-1550
In the Middle Ages, St Michael’s Church,  Caerwys would have been decorated with wall paintings, and would have had a rood cross, loft and screen. There would have been a decorated canopy above the chancel. We know that there was a screen because there is a record of it being removed in the 19th Century. We also know that much of the intricately-carved timber from the canopy was added to a low wooden screen around the chancel. It has since been relocated along the north wall.

The Reformation
During the Reformation, the appearance of the church and its forms of service would have  changed. By the 17th century the walls were whitewashed, and the altar, dated 1620, is a simple table. We have no evidence to show when these changes took place, and how they were received.

The Restoration
We do know, however, that in 1660, at the restoration of the monarchy after Cromwell’s Commonwealth period, there was considerable spending on church fittings. We know this because we have Churchwarden’s Accounts dating from 1660 to 1669. A new font was installed in 1661, and new bells were fitted in  a huge wooden frame. There was spending on redecoration of the church, a pulpit cushion and vestments.